YES, NT NEWS. THIS IS A CLIMATE CRISIS

The front page of today’s NT News is making waves across the country.

It’s easy to see why: it’s a full front page declaring that the bushfire crisis means that it’s time for action on climate change.

The bushfire tragedy has shown the world that climate change is a reality today. Australians are paying closer attention to the climate crisis than ever before. 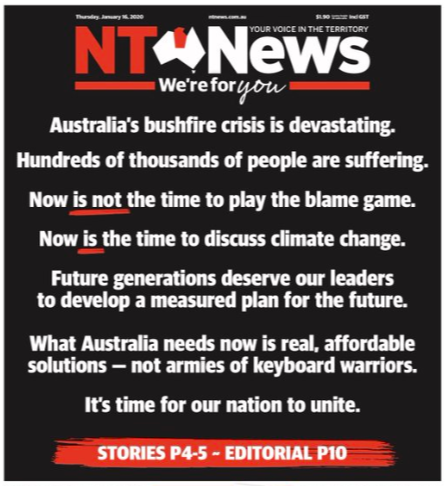 The Prime Minister will have you believe this is a zero sum game: the economy vs climate action.

But the coverage in today's NT News on food shortages, people forced from their homes by fire, a recovery that will cost billions, and even a downturn in tourism, shows there is a high economic price to pay for inaction on climate.

The good news is, as the world transitions to renewable energy the Northern Territory’s abundance of sunshine means we have an exceptional opportunity to prosper in this new era. Locally-owned renewables mean thousands of new secure jobs and lower power prices for all Territorians.

Our report The 10 Gigawatt Vision details how an investment in 10 gigawatts of renewables can create over 8,000 new jobs and over $2 billion in new annual revenue.

The NT News called for "real, affordable solutions" to the climate crisis. Well, guess what? They already exist.

In 2017 an independent expert panel released a report called Roadmap to Renewables providing the government with a roadmap to achieve a renewable energy target of 50% by 2030, whilst maintaining the affordability of energy supply, and without compromising network reliability and security.

And late last year, 18 social and environmental organisations, including the Environment Centre NT, signed a joint statement calling for a just transition to a safe climate future in the Northern Territory with a list of credible climate solutions.

The NT News is right: it's time for our nation to unite and take action.

This is the first Murdoch-owned paper to take such a visible stance. It’s a major opportunity. We need to make sure that our beautiful community’s broad, deep support for climate action is on display. All it takes is five minutes to write in and make your voice heard.

Write a letter to the editor in the NT News. (Short, clear letters are more likely to get published.)