TERRITORIANS SAY NO TO THE BAROSSA PROJECT

Territorians say no to the Barossa Project!

Did you know that one of the most polluting new gas projects in Australia – and possibly the world - is planned right here in the Northern Territory? No, we’re not talking about the Beetaloo, but Santos’ Barossa Project, which will be located in pristine marine waters north of the Tiwi Islands, with gas piped to Darwin for processing in Darwin Harbour.

The Barossa Project has been described by gas economist Bruce Robertson as “a carbon dioxide factory with an LNG by-product”, and by the Australia Institute’s Richie Merzian as “one of the dirtiest gas fields in Australia”. It will have major impacts on the environment, is a significant risk to shareholders and investors, and is a massive carbon bomb that will accelerate dangerous climate change.

Watch ECNT’s recent webinar featuring a cast of experts telling us why the Barossa is a shocking idea.

The webinar features Jason Fowler from the Environment Centre NT, Bruce Robertson from the Institute for Energy Economics and Financial Analysis, Liam Carter from the Australia Institute, and Dina Rui from Jubilee Australia. Please share this widely among your networks. 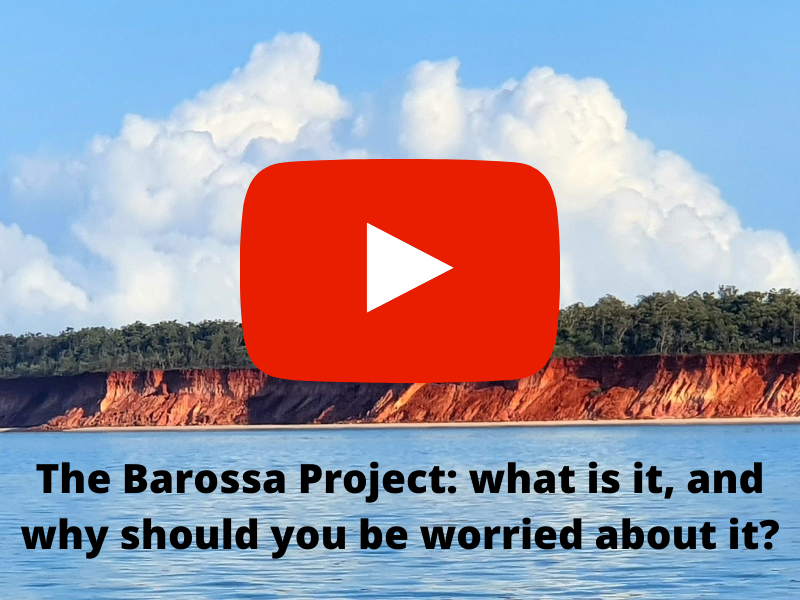 ECNT is working closely with Jubilee Research Institute, the Australia Institute, and the Institute for Energy Economics and Financial Analysis to apply pressure on the Japan Bank for International Cooperation NOT to invest in this project. You can read our submission here.

In the mean time, make your voice heard! Email Nicole Manison (Minister for Mining and Industry) at [email protected] or your local MLA NOW and tell them that you don’t support the Barossa Project.  Also make sure you share the webinar on social media and by email.